The blessed month of Dhul Hijjah is approaching and many of us are organising our Qurbani sacrifice in time for the festival of Eid al Adha. Even if we entrust our Qurbani to an organisation, the onus is still on us to partner with a reputable charity that follows the Sunnah when performing this important act of faith. UCI has been performing Qurbani on behalf of donors since 2013 and is committed to adhering to all rules and regulations.

‘But what are the rules of Qurbani?’ you might ask. Here are your questions answered.

1. What is Qurbani in Islam?

Qurbani is an annual animal sacrifice that commemorates the ultimate sacrifice of Prophet Ibrahim (AS), who was asked in a dream to offer his one and only son to God.

The dream was a test, which Ibrahim (AS) passed successfully. At the time of slaughtering, Allah (SWT) sent down a ram to be offered in Ismail’s place. So, to commemorate this miracle, adult Muslims who are eligible to give Zakat, make a Qurbani sacrifice in the name of Allah (SWT).

2. Is Qurbani compulsory every year?

Yes, Qurbani is Fard or compulsory every year. Every sane Muslim with a minimum Nisab value (of savings) is obligated to make at least one animal sacrifice on Eid al Adha to reaffirm their trust in the Creator.

“We have decreed the animal offerings for you among the rites of God. In them, there are benefits for you. So, mention God’s name on them while they are lined up, then, once they collapse on their sides, you shall eat therefrom and feed the poor and the needy. Thus, did We subject them to you, so hopefully, you may give thanks.” (Quran, 22:36)

3. Can Qurbani money be donated?

In the past, Qurbani was performed and shared with family, neighbours and the poor. Nowadays it’s acceptable to donate money to a charity either for a whole animal or a share in a big animal to have your Qurbani performed on your behalf.

Ata bin Yasar reported, “I asked Abu Ayub [Al-Ansari] how the sacrifices [of animals] were done during the time of the Messenger of Allah (saw). He said, ‘A man would sacrifice a sheep for himself and the people in his household.’” (Tirmidhi)

At Ummah Charity International (UCI), we’re already taking Qurbani bookings for 2022. Book early to ensure a successful and timeous Qurbani. Donate a cow share for £75 or a whole cow for £525. You may also choose to sacrifice sheep, goats or camels (or shares in a camel). With your help, UCI feeds thousands of poor people in Pakistan every Eid al Adha.

4. Can Qurbani be given in the name of the deceased?

Although you could offer Qurbani in the name of a deceased loved one, this is not something that our Prophet (PBUH) practised in his time. You should prioritise a Qurbani on your own behalf first.

5. When to donate Qurbani meat?

According to the Sunnah, your Qurbani/Udhiya sacrifice must be performed between the 10th and 12th days of Dhul Hijjah, after the Eid prayer. Donate as soon as possible to give us enough time to source the animals and prepare the meat for distribution.

6. Can Qurbani be done before the Eid prayer?

No. Any sacrifice done before or after this time is not considered valid, which means you will have to donate and perform your Qurbani again to fulfil your obligation. 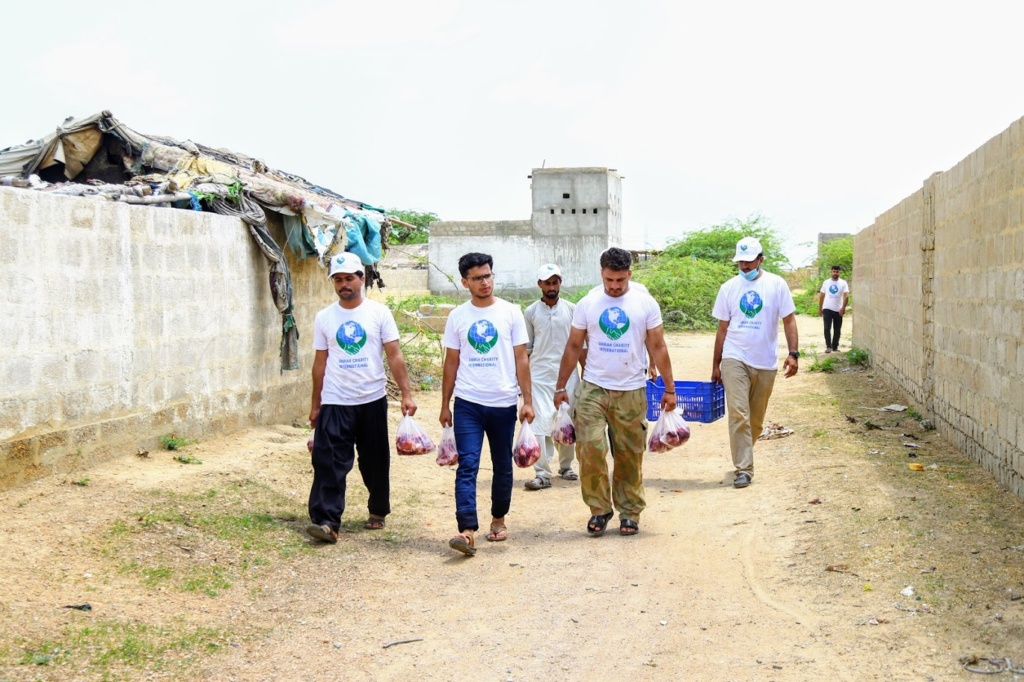 This year, the first day of Eid al Adha falls on the 09th of July, depending on the sighting of the moon.

8. Which animals are allowed for Qurbani?

All Qurbani-eligible animals have to be healthy, with no missing limbs or any other physical impediments. They should be cattle, goats, sheep or camels.

A good quality animal is a requirement of Qurbani, and essential if your sacrifice is to be accepted. UCI selects the best animals available.

Choose a whole animal or a share when you perform your Qurbani through Ummah Charity International.

9. How many Qurbani sacrifices per family?

Since every eligible Muslim must perform the sacrifice, and one share equals one Qurbani, there should be a share for each member of the family who is eligible.

A small animal (goat, sheep) is a single Qurbani, whereas a larger animal (cow, camel) could be split into seven parts and be given as a sacrifice for seven members of the family.

10. What is a Prophetic Qurbani?

Giving a Prophetic Qurbani is a great way to follow in the Prophet’s (PBUH) footsteps. He would sacrifice an additional animal on behalf of someone from his ummah, who was unable to offer Qurbani.

“The Prophet (saw) sacrificed for the one who could not sacrifice from his Ummah, one who bore witness to the Oneness of Allah and [his] Prophethood.” (Tabarani and Ahmad)

This Eid al Adha, why not revive the Sunnah and double your rewards with a Prophetic Qurbani?

11. How is Qurbani meat divided in Islam?

The animal is split into three parts after the slaughter – 1/3 goes to the donor, 1/3 to the neighbours, and the last third goes to persons in need (both Muslim and non-Muslim).

12. What are the conditions for Qurbani?

Here is a summary of the most important Qurbani rules and conditions:

Choose to partner with UCI for your Qurbani and be assured that every Islamic ruling and Sunnah practice is followed. Book now.