Pakistan is currently undergoing extremely heavy rainfall, resulting in disastrous flash flooding across the country. According to local authorities, the death toll has surpassed 1,100, with over 1,500 injured and millions displaced.

Many parts of Pakistan have become inaccessible, and rescuers are struggling to evacuate thousands of stranded people from affected areas. Balochistan and Sindh provinces are the hardest hit areas. An alarming 33 million people had been badly affected by the flooding according to the local government, while Pakistan’s disaster agency has said nearly 220,000 homes were destroyed and almost a million homes damaged.

Hundreds of people, including women and children, are stranded in the calamity-stricken areas seeking help from the authorities. The flood water has swept away many buildings, including houses and schools, making the situation alarming for locals. Although the government has declared an emergency across the country, a lot is still required to be done to help the flood victims survive. With hundreds and thousands left helpless due to the flood in Pakistan, it is time for us to join hands and help them overcome the effects of this natural disaster! 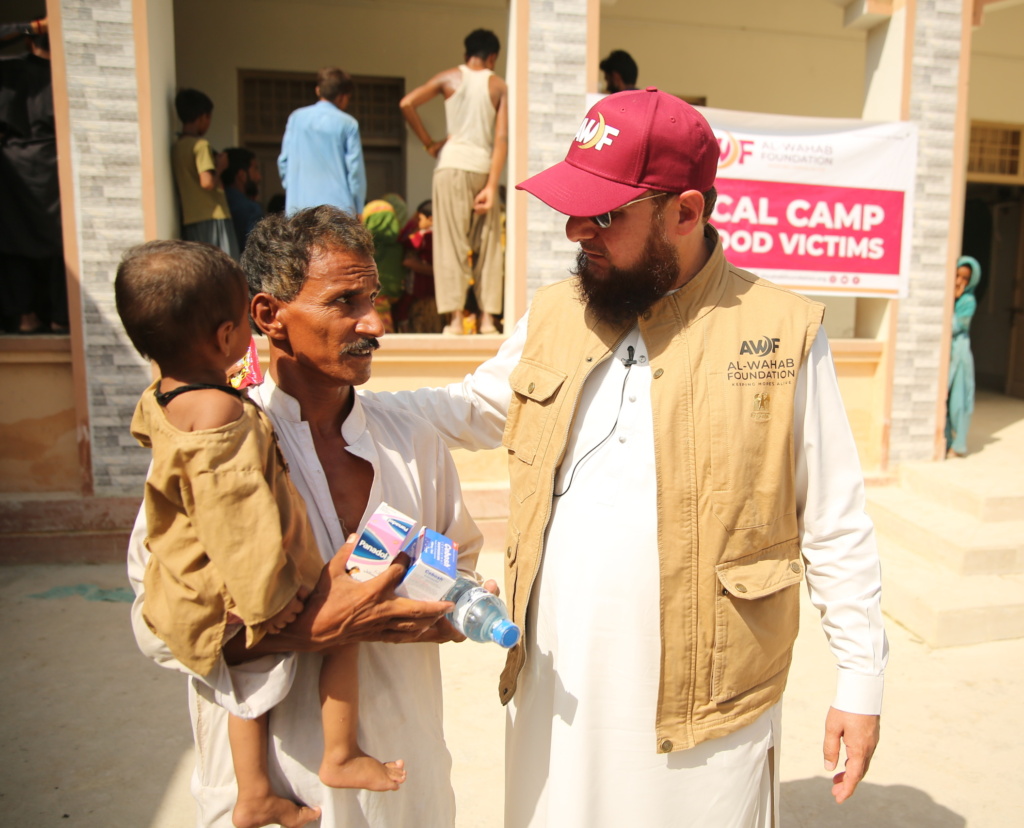 To monitor the flood relief operations in Pakistan, Mufti Abdul Wahab reached Pakistan to visit the calamity-stricken areas of Sindh. During this tour, he visited Dadu, Khairpur Nathan Shah, Mehar, and Johi.

Mufti Abdul Wahab ensured the provision of 20 tents and 500 mosquito nets to all those families who were homeless and needed support for their families for survival. Moreover, he directed team UCI to provide food packs to the flood victims residing in the tents. These food packs facilitated 2,000 flood victims and included different food items sufficient to feed a family for a month. In addition, Ummah Charity International arranged to feed as many victims as possible under the supervision of Mufti Abdul Wahab. A total of 6,600 people have been served freshly cooked meals.

With the contribution of donors, UCI also organised a medical camp as the flood victims are rapidly contracting diseases. The situation has led to the diagnosis of skin and eye infections, eye infections, diarrhoea, typhoid, and dengue fever. UCI supplied free medicines to 500 locals so that they could be treated in time.

How to Help Pakistan Flood Victims?

Without access to urgent medical aid, food, clean water, and adequate shelter, the flood victims are at even more risk following unpredictable weather conditions.The calamity-stricken people of Pakistan are looking forward to your help. Please donate as much as possible to provide them with food, clean drinking water, and emergency medical aid. You can be their hope to live again!

Donate to Bring Them Back to Life!

Ummah Charity International calls for donations to help the flood victims of Pakistan. To make it achievable, here is how you can contribute to help!